Ruby red with a garnet hue Agostino Petri won a Gold medal at the 2021 London Wine Competition. It is fully developed on the nose with ripe fruit and sweet spices reminiscent of chocolate/strawberry praline and candied cherry. Well-rounded and soft tannins on the palate fill the mouth. Very well balanced and extremely long, some ripe red fruits on the finish. Pair it with roasted meat and aged cheese.

London Wine Competition recognises and rewards the wines that prove themselves based on their qualities, their pricing and the packaging. They award the wines that are successfully able to retain themselves on the retailer's shelf and a restaurant's wine list. The winners are judged and awarded by experts - like Katherine Larsen MS(Master Sommelier, UK Master Sommelier of the year 2014), Georgios Iordanidis (Head Sommelier and Wine Buyer at Zuma, London), and with many more on the list, one can expect that only the best wines will come up top. 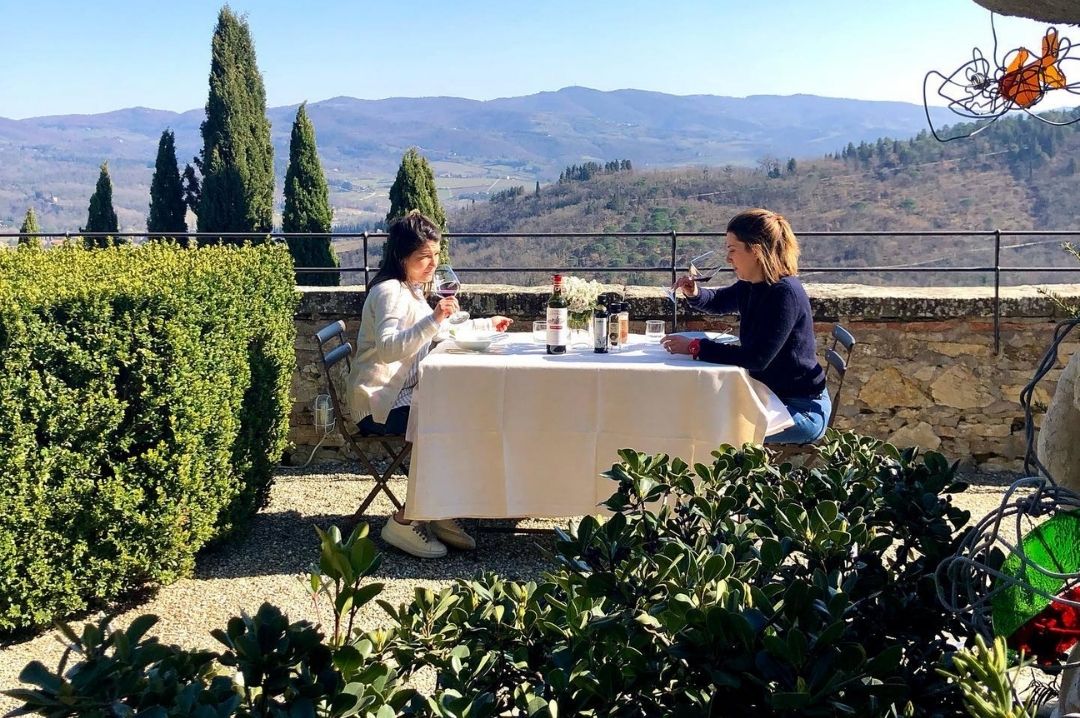 The origins of Castello Vicchiomaggio, once named Vicchio of the Lombards, dates back roughly to 1400 AD, as reported on some ancient preserved parchments.
Its location on top of a hill overlooking the Val di Greve, 18 km from Florence and 38 km from Siena, has proved to be a very strategic position for the winery, over the centuries.
Castello Vicchiomaggio is built of solid stone, at the heart of which is the high embattled tower dating back to 1100AD. The castle is preserved by its defensive boundary walls. Thanks to careful and meticulous restoration, it is well­‐preserved and has been recognised as a national monument.
In the Middle Ages, Castello Vicchiomaggio demonstrated the crucial importance of its position by playing a vital role in the defence of Florence during conflicts with Siena.

Later it became an exclusive Renaissance Manor House and shone in all its splendour. During this period, it was proposed to add the word Maggio to the original name Vicchio in the memory of Maggiolate of Calendimaggio.
In its long and glorious history, many known names stayed at the Castle, including Leonardo da Vinci and Francesco Redi.
Leonardo da Vinci stayed at Castello Vicchiomaggio during the period in which he painted his masterpiece, the Mona Lisa. He drew a charming and impressive picture which can be found in his documents proving that he stayed here; Francesco Redi, an academician, composed his famous poem "Bacchus in Tuscany" here in 1865. 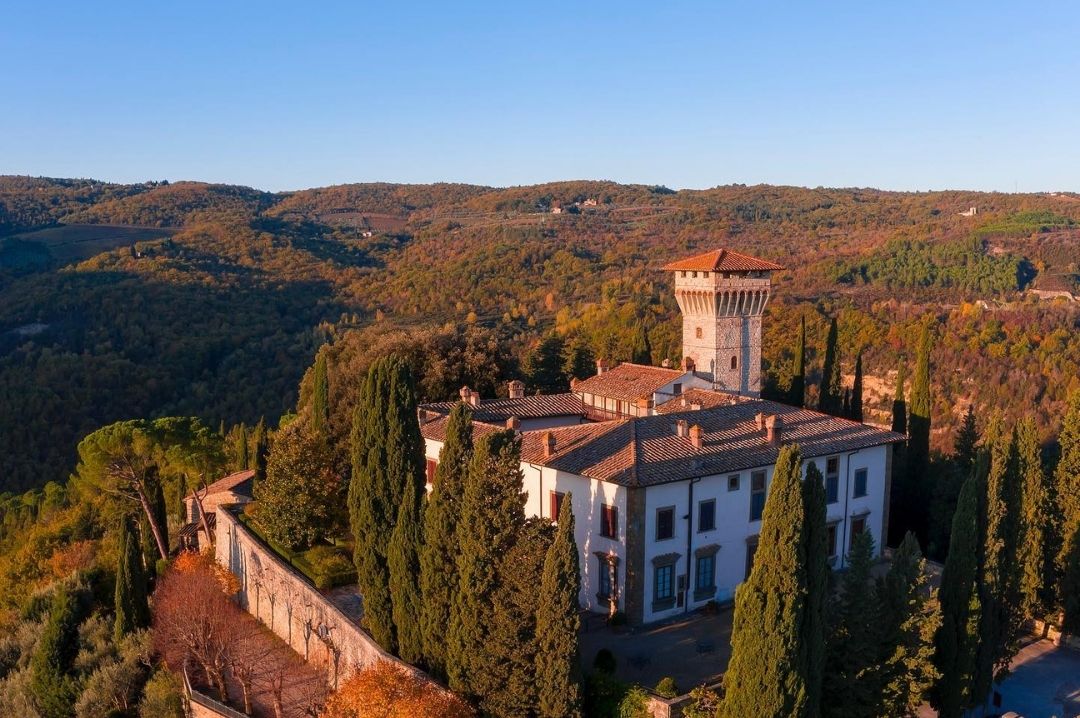 In 1921, after many adventurous years spent working in restaurants of Turin, Evian Les Bains and Paris, Federico Matta (born in Asti, Italy) started importing wine in London. F.S. Matta Ltd became the largest and most dynamic importer of Italian wines and spirits in the United Kingdom, introducing previously unknown products, such as Campari, Gancia, acqua San Pellegrino, Olio Bertolli, Bolla and a myriad of other products that, thanks to the English showcase, have become leading brands in exports.

In 1966, FS Matta Ltd was acquired by the Beecham Pharmaceutical Group to diversify their production into the wine sector. Federico Matta, still full of energy at 75 years, now focuses on Castello Vicchiomaggio, the winery that he purchased two years ago.

In 1970, after studying at the School of Viticulture and Enology in Alba (Piedmont, Italy) for three years while also being active in the trade of wines in the UK, Federico's son John Matta  began his career at Castello Vicchiomaggio. As an expert on the importance of soil characteristics, low yields and sustainable traditional agriculture, John initiated a remarkably prudent and highly innovative step at the time, replanting the vines in line with his philosophy. Sangiovese is predominant, of course, along with Cabernet and Merlot. In wine production, John prefers wines that use oak sparingly and is an avid supporter of traditional oak barrels. His style makes the wines elegant, characterised by excellent longevity.

In 2010, the two older daughters, Federica and Delfina, became part of the family business, devoted to developing premium accommodation facilities and restaurants.

Castello Vicchiomaggio is the perfect destination for wine lovers visiting Tuscany. Here you can taste all the wines produced by John Matta, which are truly worth tasting. These include La Prima, their Gran Selezione made with 100% Sangiovese, and in stark contrast, FSM 100% Merlot. Different styles but both unique and elegant. 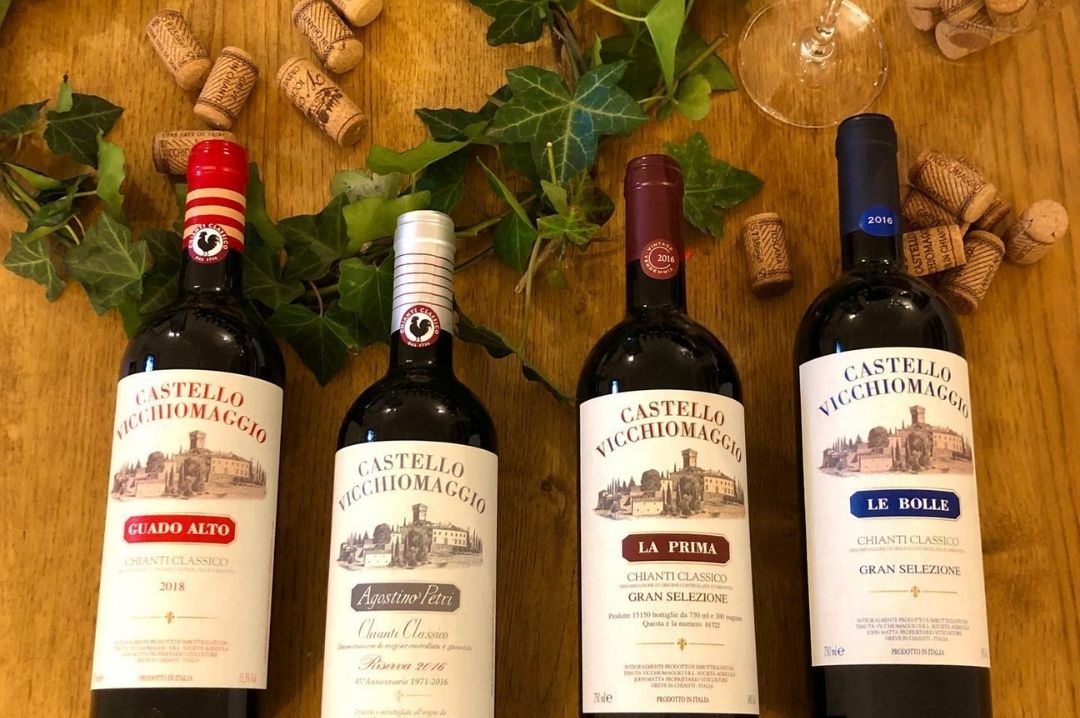 About the Winery & Wine Making

Castello Vicchiomaggio is a notable maker of  wines recognised all over the world. The wines  are always produced at the Castle, and the proprietors John and Paola Matta commit their lives to protect this age-old practice.

The estate covers 140 hectares, of which 34 are vineyards, 10 are olive trees, and the rest is a park.

Among the cultivated varieties: the most prominent vine is Sangiovese, which is a significant variety of grape for Chianti Classico, but there are also other indigenous grapes such as Canaiolo and Colorino, as well as two international varieties which are Merlot and Cabernet Sauvignon. The latter is in particular demand for the production of their famous IGT-certified red wines.

The Chianti Classico area is characterised by a Mediterranean climate and the soil called Galestro, rich in clay and large stones.
Particular attention is paid to the direction in which the vines are planted, all facing south, ensuring maximum exposure to the sun throughout the day.

As for the type of pruning, the family has chosen two types: Cordon and Guyot. Their application depends on the variety and yield of each vine. These applications determine the number of grapes produced, and consequently, the quality of the end product. In addition, these pruning systems help prevent excessive removal of branches from the main trunk and therefore promote a higher concentration of substances necessary for the proper ripening of the grapes.

Harvesting is done by hand and takes place between mid-September and mid-October. Once harvested, the grapes are pressed in special machines. The obtained product is then transferred into stainless steel tanks and maintained at a controlled temperature. 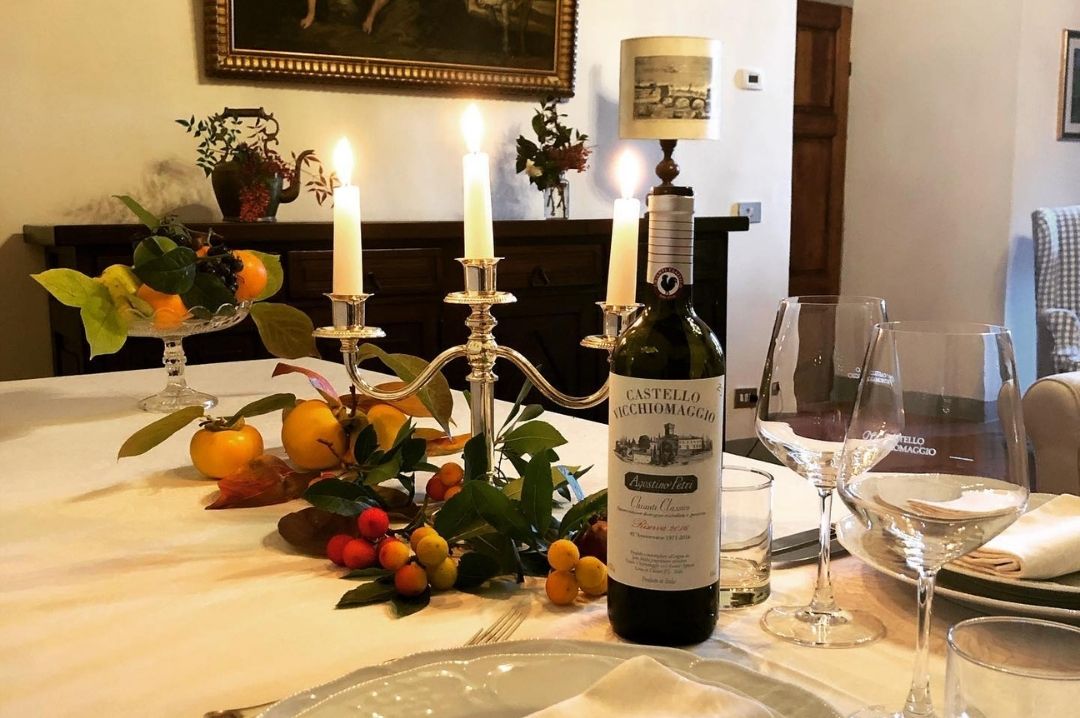 At this point, alcoholic fermentation begins, promoted by the presence of yeast. Following this, the fermented juice is filtered to separate the liquid from the skins, which contribute to the natural alcoholic fermentation.
The skins are not wasted and get reused in a distillation process for the production of grappa.

The filtered wine remains in steel tanks for 20-30 days more, where the second fermentation happens, the so-called malolactic fermentation.

In January, the wine is transferred to the maturing cellar, where it is kept to rest in French oak barriques and a large barrel. The period of ageing varies depending on the type of wine. Once aged, the wine is bottled and left to settle.

Tours of the vineyard and historical cellars allow you to discover the secrets to the making of enjoyable award-winning wines. Visits are by appointment only and have an average duration of one hour and thirty minutes. After the guided tour of the cellars, you can choose to continue your experience at Castello Vicchiomaggio with wine tasting and lunch in the restaurant of Castle or a tasting and a dinner paired with the labels belonging to the Castle. 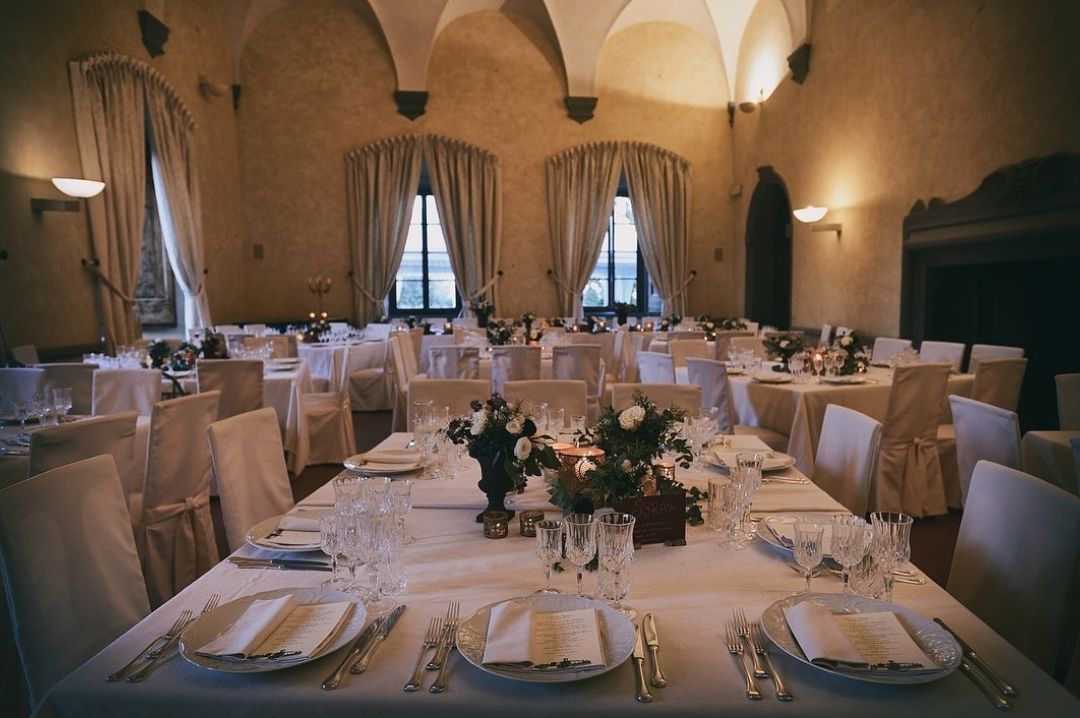 Getting Married at Castello Vicchiomaggio

Marriage is, without doubt, one of the most significant moments in the life of a couple and symbolises the beginning of a new life together.

The Chianti hills offer the most charming and romantic backdrop for celebrating your wedding.
Castello Vicchiomaggio offers the possibility of a truly unique wedding celebration (civil and religious), reception and accommodation, all in one place.

It has both indoor and outdoor spaces that can accommodate guests for a magical and unforgettable experience. Your wedding can start in their Renaissance garden that is perfect for aperitifs and after-dinner get-togethers, passing through the charming courtyard, and then; enjoying the romantic atmosphere during dinner in the beautiful banquet hall of the castle.