Whether you spell it “whiskey” or “whisky”, it doesn’t matter (maybe a little), because the fact of the matter is that a quality whiskey has the power to make everything seem alright, even if it is for a while. Roaming around London, looking for a quality pour of whiskeys from the neighbours, the American expressions or the up and coming Japanese contingent, can to put it lightly, be confusing.

If you know the right spots, the pours seem slightly sweeter than usual. In Mayfair, there are some solid places that offer whiskeys from some of the finest producers, rare vintages and in some cases, the first-ever single barrel batch of Jim Beam. With that being said, DRAM ROLL, please!

The Bar at Hush 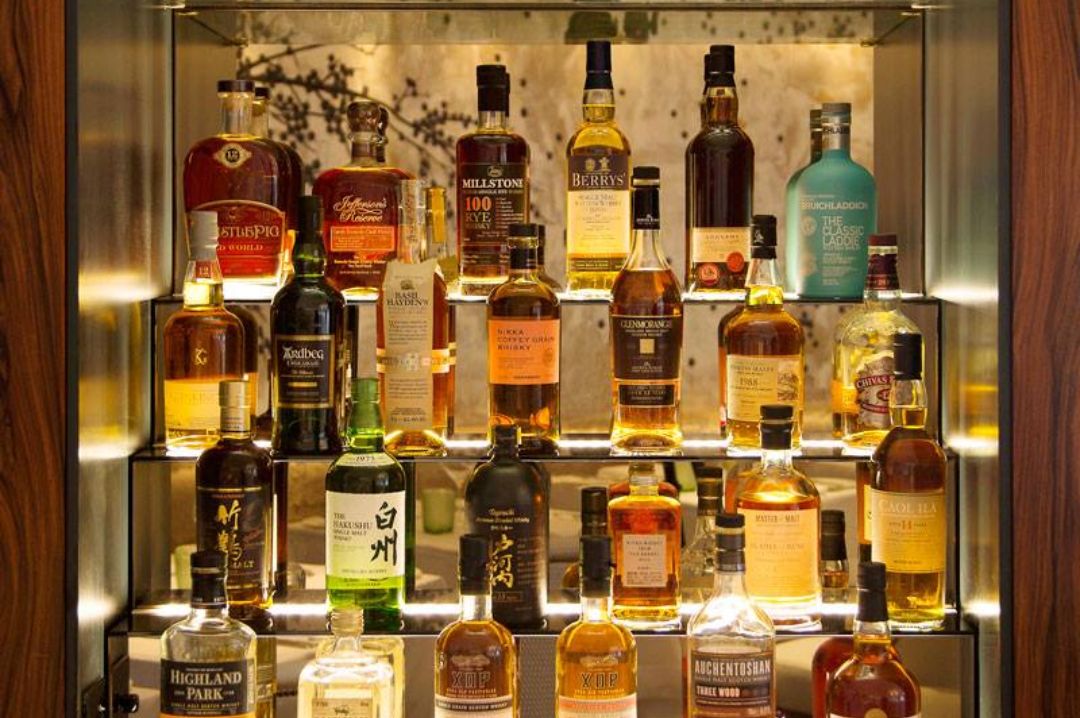 One of Mayfair’s most sophisticated establishments, The Bar at Hush has an array of drinks to choose from. While the cocktails draw plenty of attention from drinkers all over the city, there is an underrated whiskey collection that deserves all the notice it can get. The team at The Bar at Hush has brought some gems from many of the world’s biggest whiskey producers. Chief among those are drams from Scotland.

Highland creations Glenmorangie Quinta Ruban, Dalmore King Alexander make an appearance and so does the lavish Glenfiddich 30 yrs. Irish and Danish whiskeys make up the European whiskey contingent at The Bar at Hush, while the world’s mantle is handled by American bourbons, Japanese bottles like Suntory Yamazaki 12yrs and American Tennessee options as well. 50 top of the line whiskeys make up the collection, each one intriguing, exciting and mind-blowing to sip on. 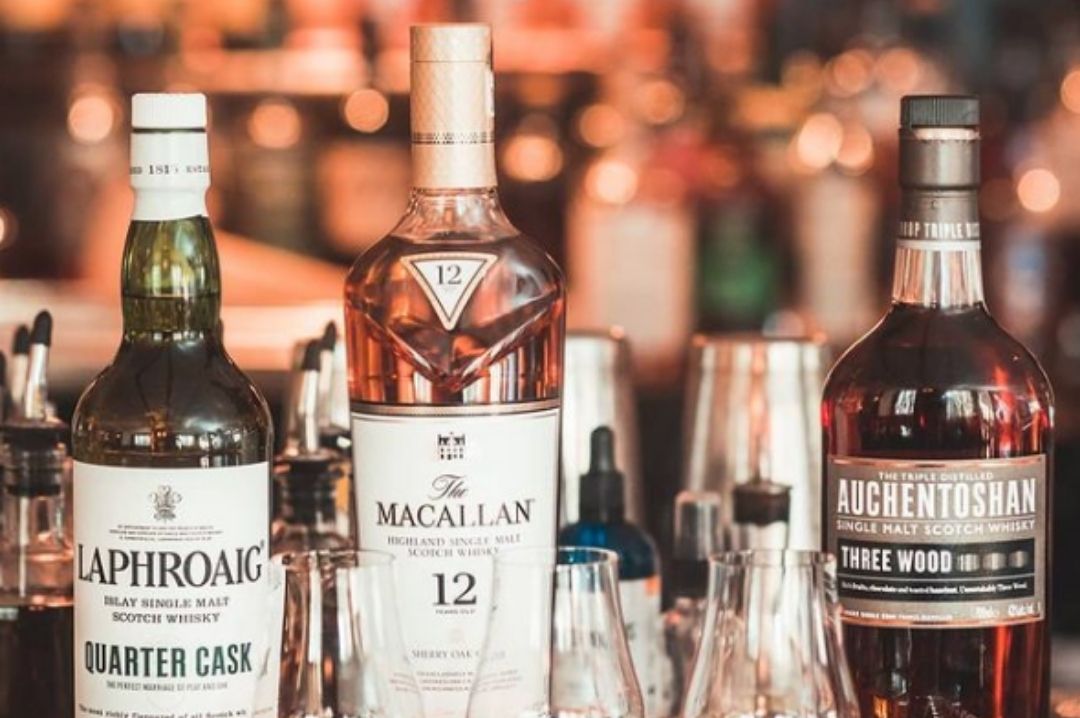 This polished, upscale, speakeasy first opened its doors to the public back in 2012. Ever since, it has been a spot where the history of drinks in London has added a few more pages. Speaking of history, The Luggage Room has some noteworthy whiskeys in its arsenal, quite a few of which have been lauded by drink historians in recent years. The whiskey collection at The Luggage Room is a massive 60 bottles.

Customers can feast on selections from Speyside, Islay (the Bowmore 26 yr vintage), Lowland staples like the Auchentoshan Three Wood and other Scottish whiskey options. There’s also plenty of Irish whiskey options on the menu, headlined by the Method and Madness Ruby Port 28 year. Japanese drams, American blends, bourbons, ryes and Tennessee’s round up a spectacular whiskey collection enough to turn any whiskey lover into a staunch whiskey connoisseur.

Timings-
Wednesday and Thursday- 5 pm to 1 am
Friday and Saturday- 5 pm to 2 am
Location- Grosvenor Square, London W1K 6JP 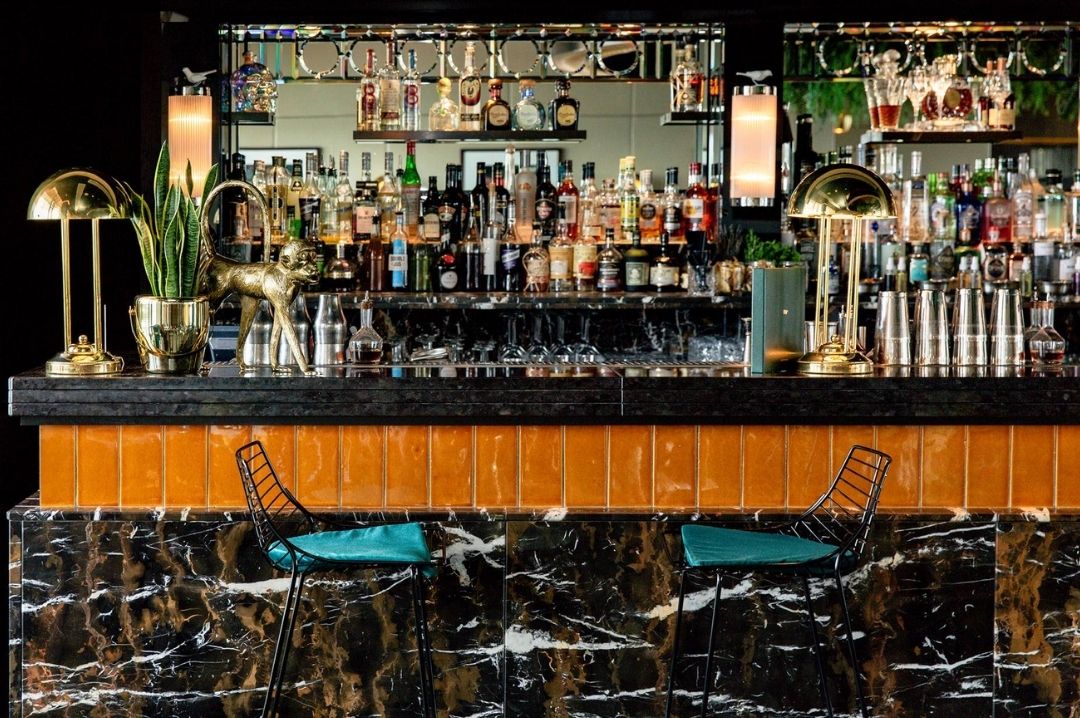 The 28th floor of London Hilton on Park Lane offers an unparalleled vantage point of London. The floor of the hotel is home to 10°, Galvin at Windows’ in house bar, home to plenty of drinks, cocktails, and an extensive whiskey collection. The verdant interiors, which take a dusky colour when the sun sets over the city. The golden hour at Galvin at Windows is an opportune time to enjoy a nip of the finest whiskeys on offer at the bar.

The whiskey collection is a mix of some modern creations, timeless classics and plenty of intriguing profiles that make the sipping of whiskey at 10° Galvin at Windows a true connoisseur's experience. Drinkers can savour bodied single malts from the Highlands like the Dalmore, gentler and floral expressions from the Lowlands like the Glenkinchie to name a few. 10° Galvin at Windows also has a decent number of whiskeys from the United States, including the Woodford Reserve from Kentucky. 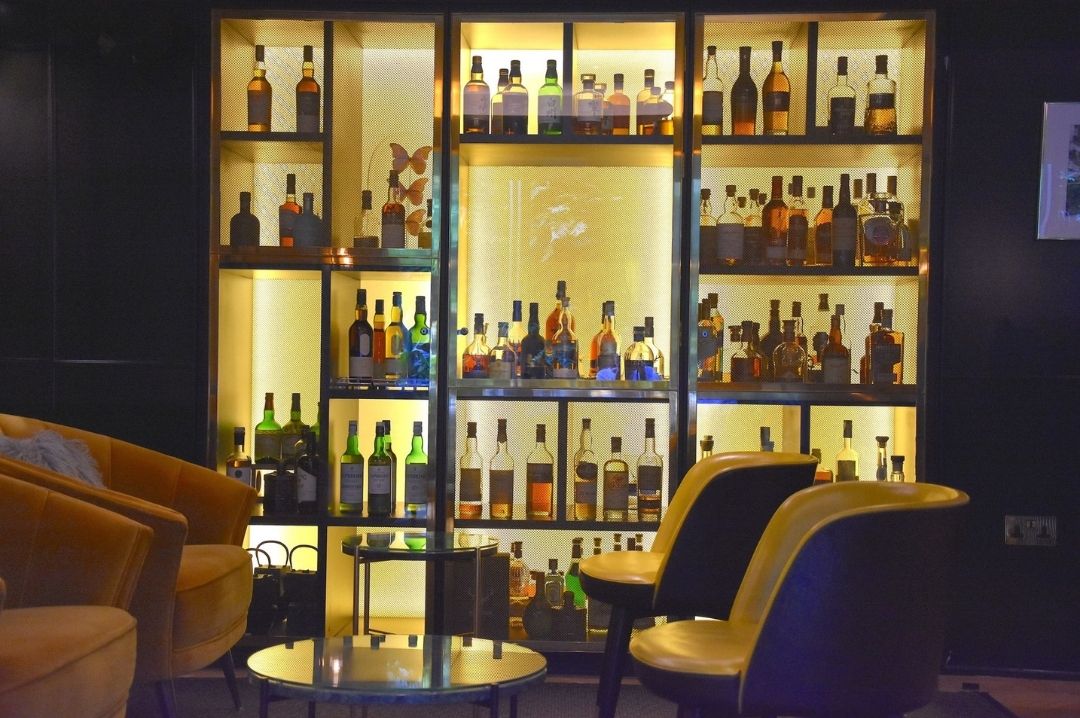 This Mayfair hotspot is a crossover between grandeur and an intimate setting. The Athenaeum’s environment is full of small nooks, plush sofas, and leather armchairs, but the spot that draws the maximum amount of attention for us is The Athenaeum’s backlit display cabinet which houses the bar’s prized whiskey collection. The whiskey and bourbon collection features rare gems from quite a few countries.

The dram list includes expressions like Maker’s Mark from Ireland, Macallan Gold, Lagavulin 16 years to name a few. While sipping the whiskey itself brings joy, The Athenaeum also holds a whiskey Tasting Masterclass. Star barman Carlo Fraiese hosts a one-hour masterclass, which includes four 25ml whiskeys, complete with perfectly-paired cheeses. Choose any of the three masterclasses and The Athenaeum will leave you pleased by the end of them all. 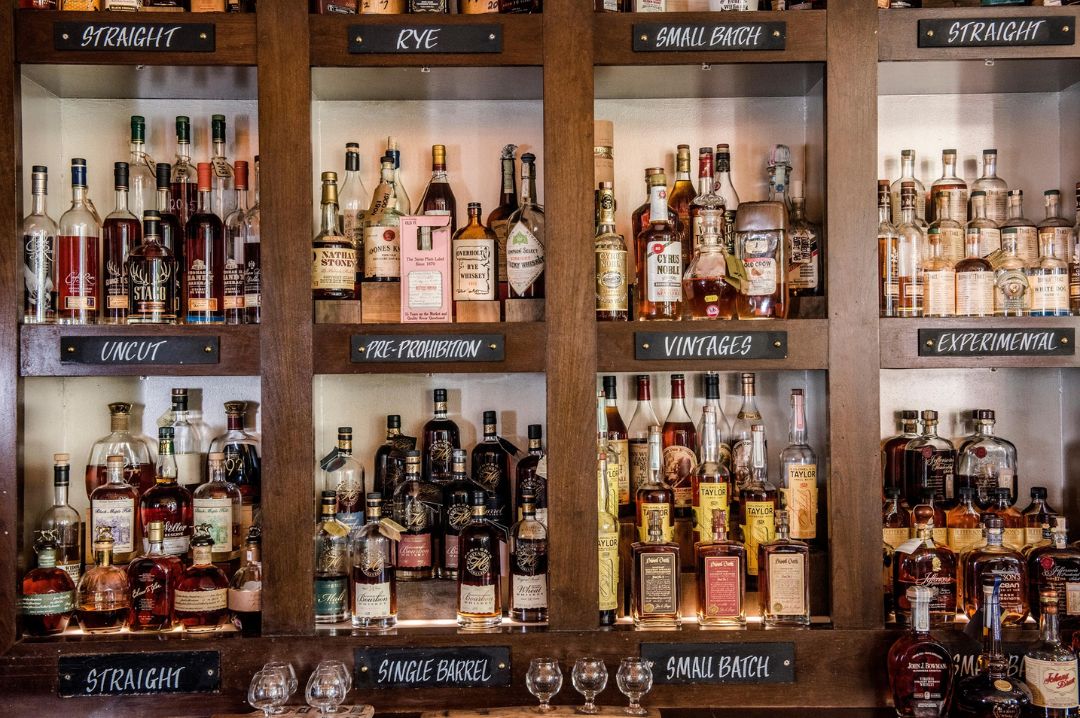 The name is enough? Possibly not, and aptly so because the name doesn’t give all the details about just how astonishing the collection is. Marriott’s The Bourbon Bar has a serious list in their establishment. From rare, pre-prohibition bourbons to a very prized first-ever single barrel selection from Jim Beam, The Bourbon Bar is a place that feels like one straight from the dreams.

The tasting flights are as unique as the setting, one where guests can appreciate the truly emphatic world of whiskeys. 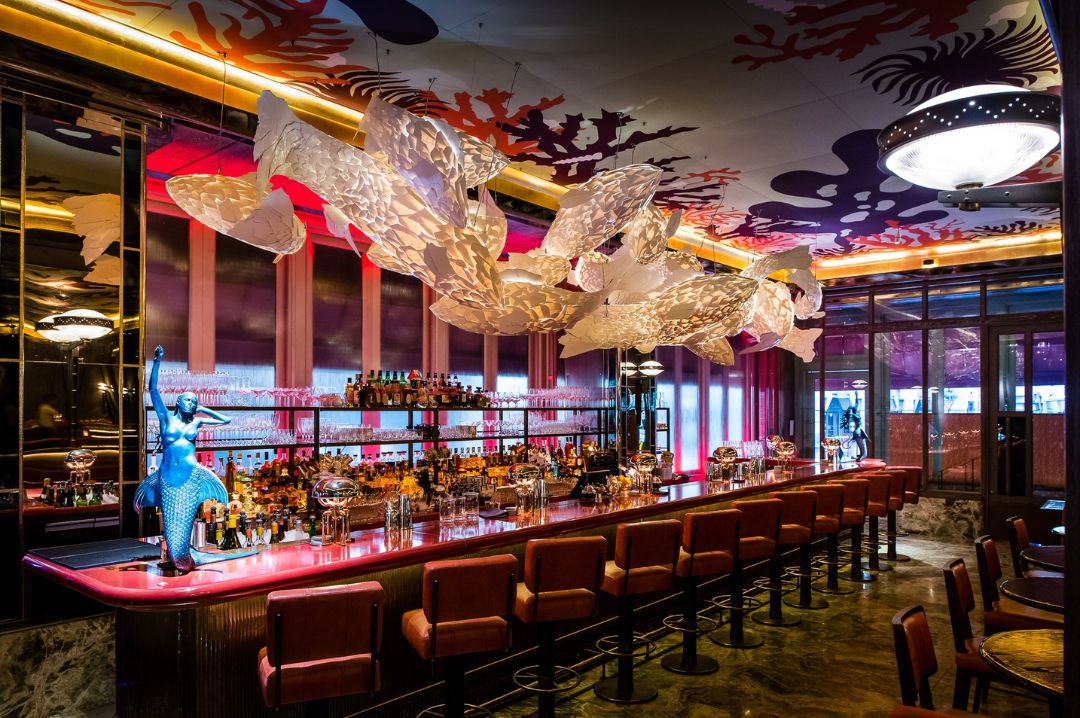 The bar serves its whiskeys in three styles, the standard serve where the whiskeys are served neat in a snifter glass. The highball, which is the most popular serve for whiskeys in Japan and the last one is the Mizuwari, a Japanese favourite where the whiskey is mixed with chilled still water. There are so many Japanese whiskeys on the menu, that it’s hard to name a couple. Why not look for yourself and choose? 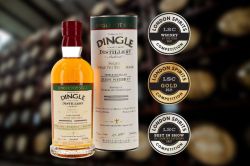 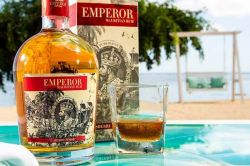 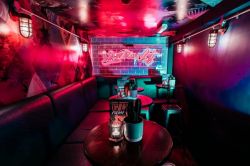 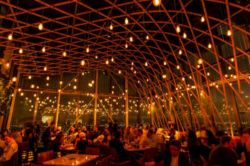 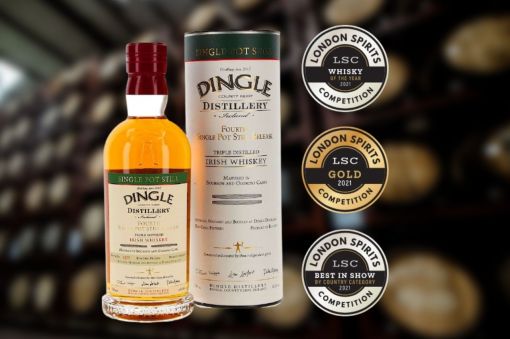 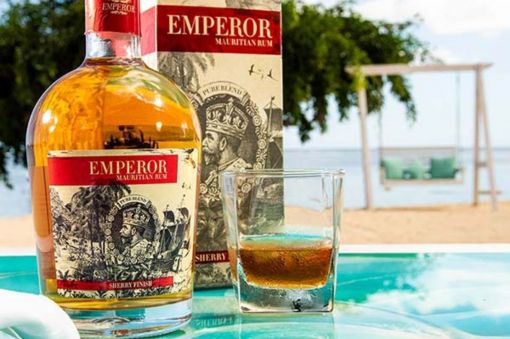 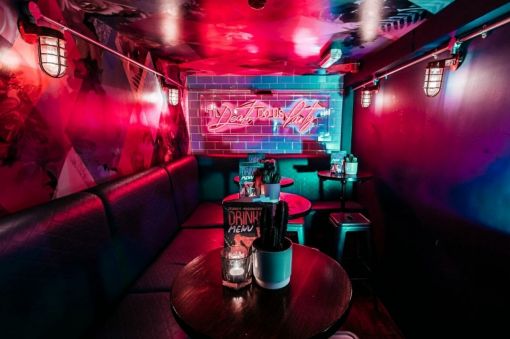 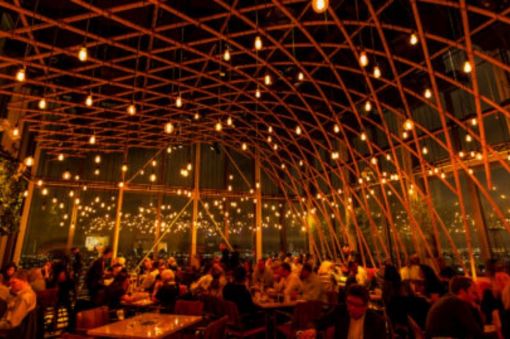