These pubs run from west London to the east and include the top 15 riverside bars and pubs on the Thames where you can not only enjoy a view (or a dip!) but also a pint or two. Please check each bar and pub's information before heading out.

The Boaters Inn is situated on the Thames in the beautiful Canbury Gardens, just a ten-minute walk from central Kingston. The interior is a mix of classic and contemporary with 65 seats on the riverside raised dining area opposite the bar and a smaller dining space with a beer garden in the back.  Plus points for live jazz on Sundays! 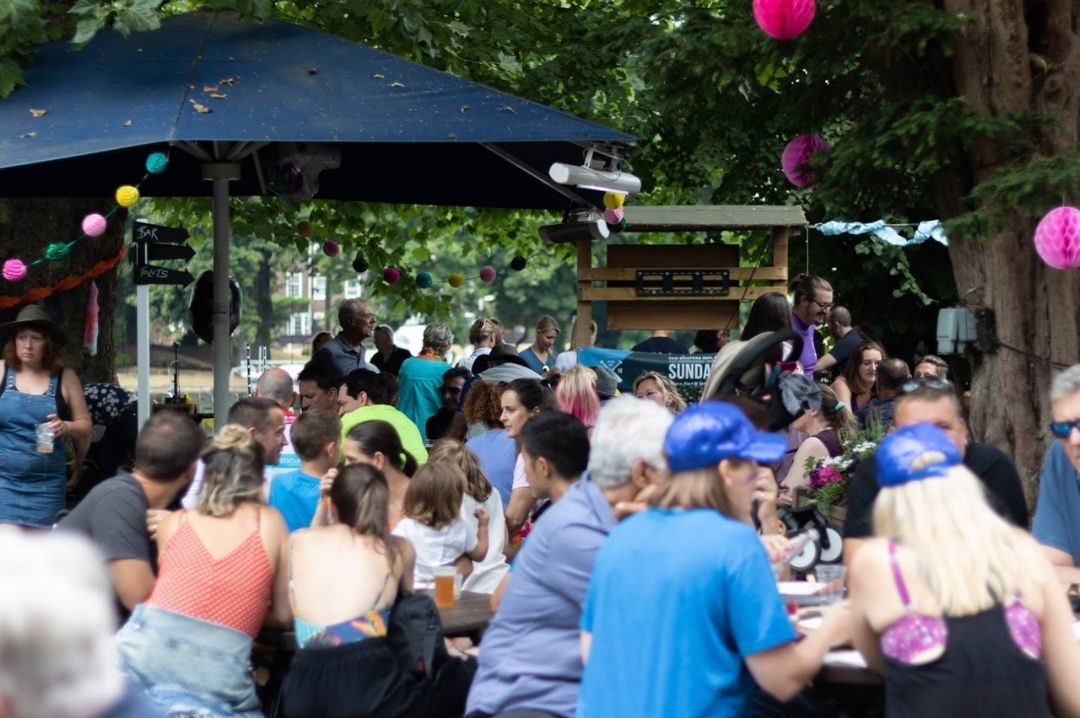 White Swan is a traditional free house right on the banks of the River Thames in Twickenham. The pub dates back to the 17th century.  Made up of two rooms, a terrace-balcony, and a garden right on the riverbank summertime is known to be the best here, with an open balcony and sunshades in the garden. The winters are graced with a 17th-century fireplace to keep you warm as you enjoy your drinks. Sometimes, at high tide, the garden is IN the river but never for long. 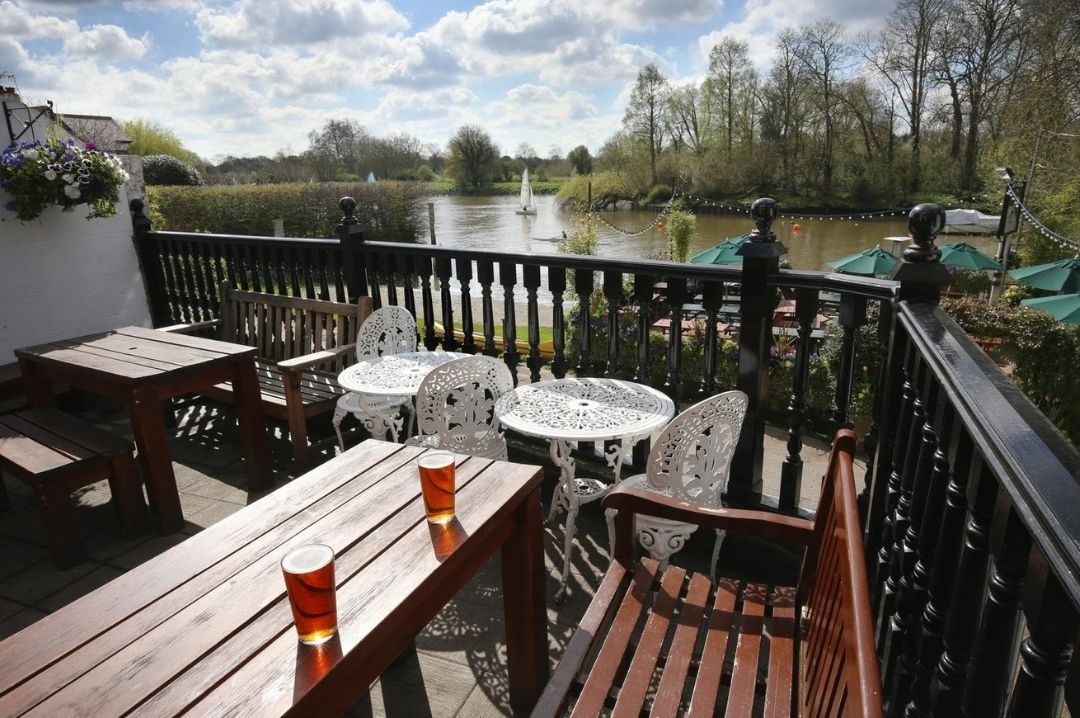 Established in 2004, Stein’s is a stylish, and popular attraction on Richmond Riverside.  Stein's enjoys a prime location, directly beside the River Thames, situated just a couple of hundred metres from Richmond Bridge, and offers stunning views towards Richmond Hill. Sip on some German pints with a side of Bavarian dishes, as you take in the river views.

Richmond's iconic riverside pub is famous for its great ales, home-cooked food & rugby. Whether it's lunch on the Thames (or sometimes in it) or sundowners in the garden, no visit to Richmond is complete without a visit to “The Cross”. The White Cross stands on the site of a monastery. A big, handsome boozer, it has large bay windows that offer none-closer views of the river. Crowds flock here in summer to bask on the waterfront with a cooling drink, but fires and little nooks in the many rooms keep things cozy in winter. 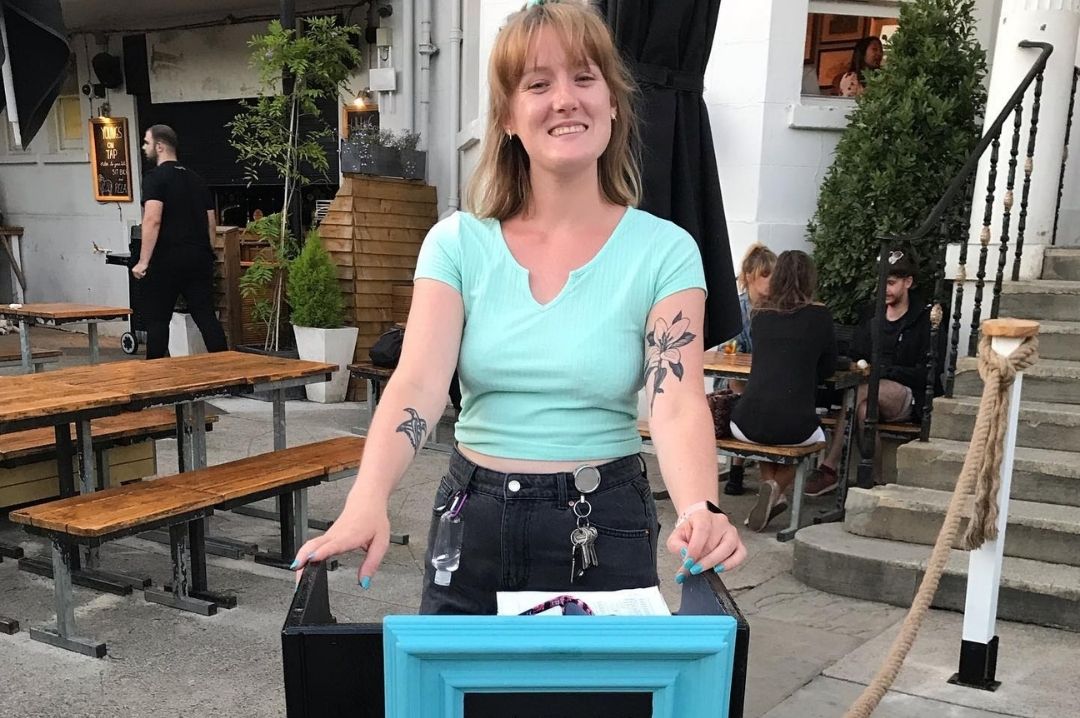 Beside a muddy but peaceful stretch of the Thames, facing a little island straight out of fiction, this higgledy-piggledy pub offers tranquillity both inside and out. The City Berge is a historic 14th-century public house with a wealth of history behind it and is situated on the Thames riverside, nestled in the picturesque area of Strand on the Green, Chiswick. They re-opened in May 2014 after extensive refurbishment. The bar serves a wide range of drinks, including 7 rotating hand pull ales and an extensive wine list.

Built-in 1662 and rebuilt in 1899, the White Harthttps://www.whitehartbarnes.co.uk/ is a piece of local history and home to the famous SW13 sunsets. Located on the banks of the River Thames and just a short journey away from central London, the beautiful pub has a carefree countryside feeling, providing respite from the concrete jungle. What really brings in the punters, though, is the chance to sink into a chesterfield by the fire, or find a spot to stand on the river-view first-floor veranda, down a pint and talk about the rugby match that’s just played out on the big screen. 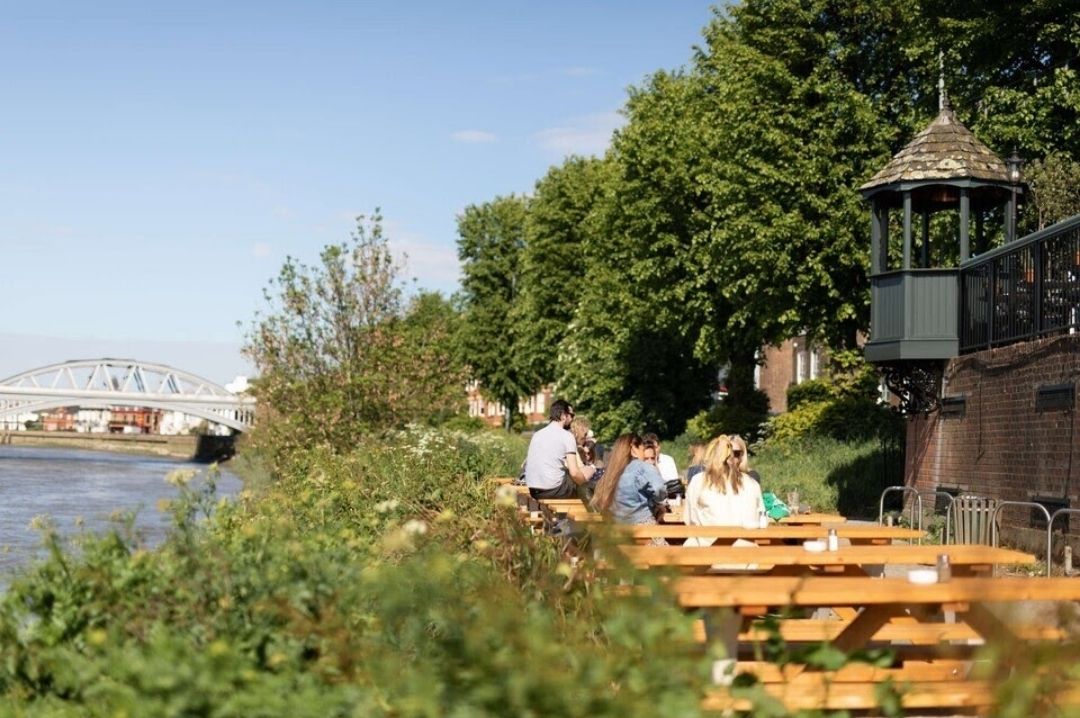 The Old Ship is situated on the banks of the River Thames, ideally located a short walk from Ravenscourt Park, Stanford Brook, and Hammersmith station. The boathouse feel of the airy building is continued in the maritime-themed decor with sailing paintings and iconography. Depending on which areas have been hired out, you should have a choice of outdoor seating upstairs or down or a spot in the classy main bar and restaurant. Three cask beers are on rotation all year round. 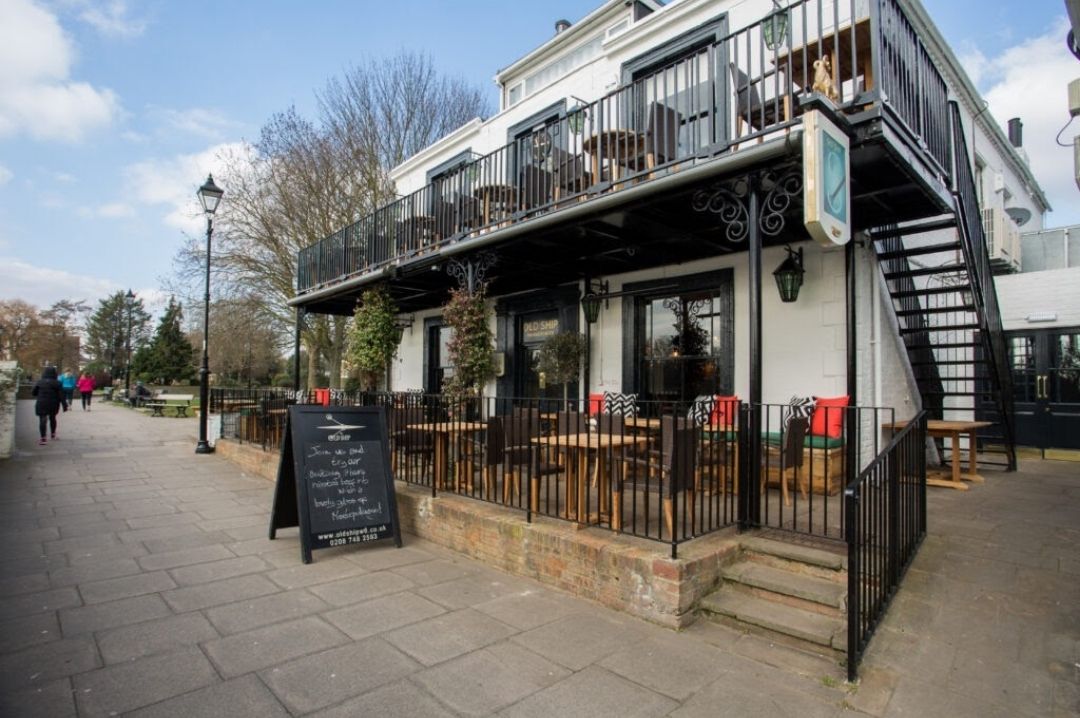 Several pubs stand amid the rowing clubs, dog-walkers, and strategically placed park benches on the Upper Mall embankment upriver from Hammersmith Bridge; this one is perhaps the best (and certainly a prime spot from which to watch the Boat Race). Inside, it’s basically a classic duck-your-head heritage pub experience, but most drinkers come here to sit in the vine-entangled conservatory or the riverside terrace overlooking the houseboats. What most people don’t know is, The Dove has the smallest bar room in the world and was also a favorite of both Charles II and Nell Gwynne. 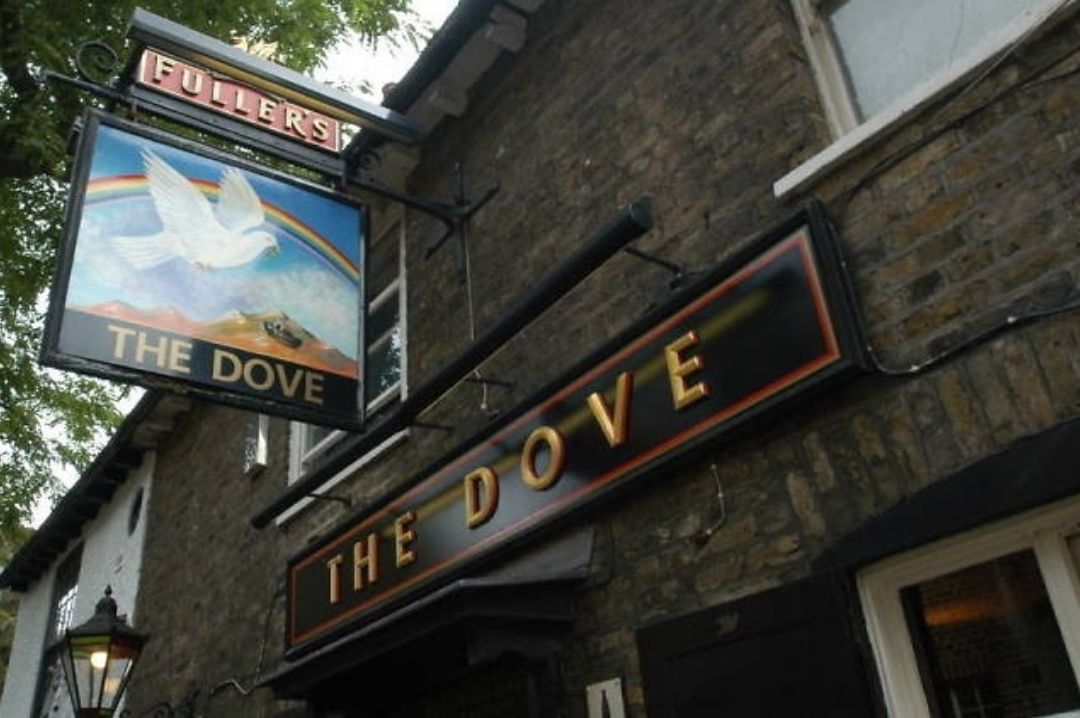 The Blue Anchor is an iconic pub in West London.  In prime position on the banks of the River Thames in Hammersmith, The Blue Anchor is always warm and welcoming. It’s a home away from home whether you’re after a riverside drink in the sunshine or a warming glass of Malbec by an open fire.  A short walk from Hammersmith Bridge, The Blue Anchor was first licensed in 1722 and is still a true local pub some 300 years later. Downstairs is a traditional, wood-paneled 17th-century pub, while upstairs you’ll find the beautifully refurbished ‘River Room’, with incredible views of the river. If you are a fan of old pubs, then check out the Oldest pubs in London. 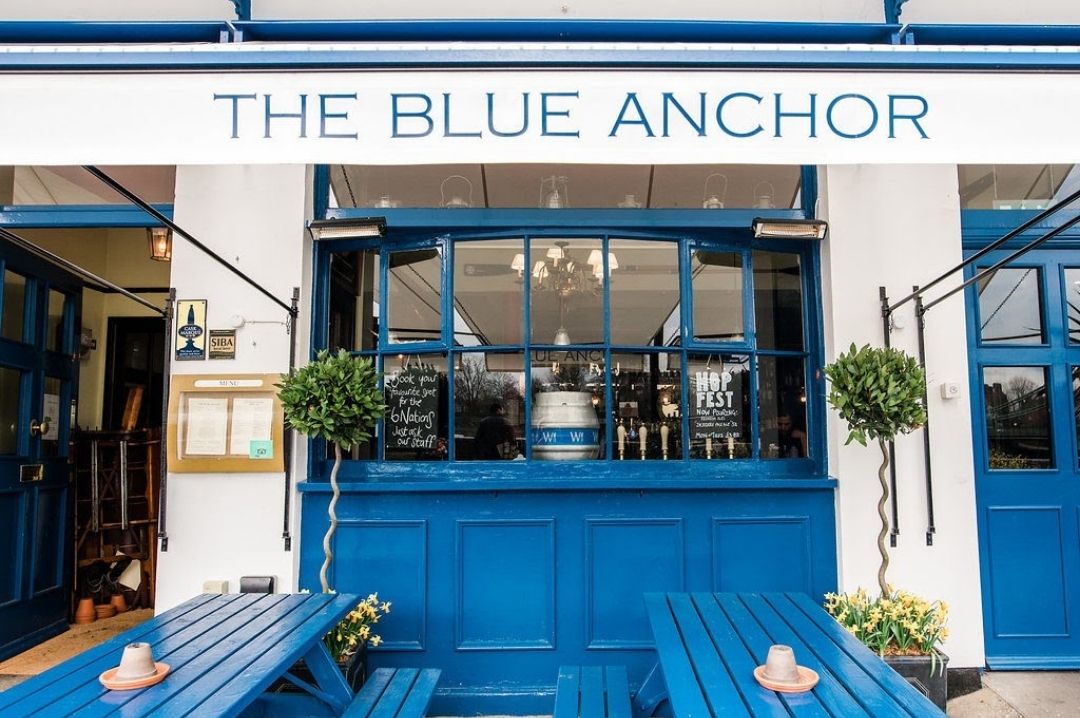 The Crabtree is an iconic pub situated on the quietest and most picturesque stretch of the Thames between Hammersmith & Putney bridges. Home to an award-winning comedy club, an acclaimed restaurant, the largest pub quiz in West London, live music, and an always impressive, ever-changing line up of guest ales, there really is something for everyone at The Crabtree. 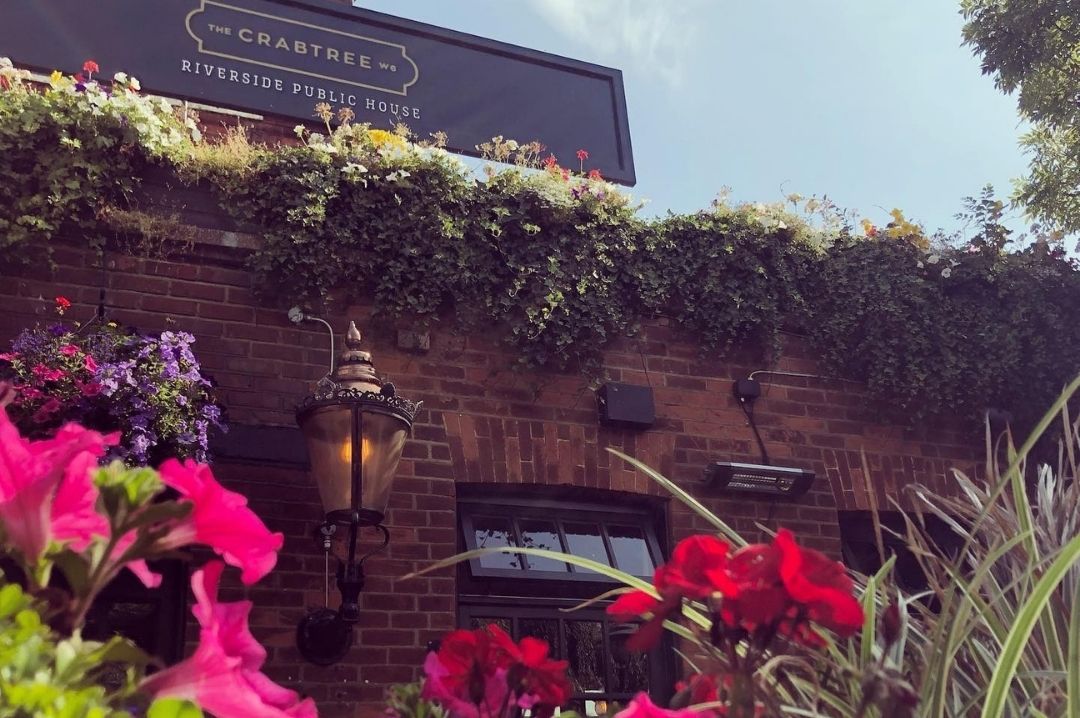 With bright, riverside views the versatile private hire spaces within the pub are ideal for drinks, birthday parties, sit down meals and family gatherings.A grand Victorian grade II listed building that has watched over the River Thames in Putney for nearly 150 years. Sitting at the start of the Oxford and Cambridge University Boat Race, Duke's head has enjoyed this uniquely British battle of the oars for over a Century.

The Ship is Young's local, founded as a waterman's inn around 1786, shines like a riverside beacon. The peaceful and relaxing front bar is ideal for reading or quiet conversation, whereas the much larger conservatory by the Thames attracts a lively mixed crowd, which means seats are always at a premium; an excellent garden overlooks Wandsworth Bridge. When it comes to food, The Ship is known for its outdoor barbeque kitchen that holds a wide range of barbeque meats to enjoy with your pint.

Town of Ramsgate claims to be the oldest pub on the river, it looks like it had a refurb in the ’70s – all patterned carpet and chunky wood tables. But it’s full of nautical bric-à-brac and the odd historic manuscript. This much-loved hostelry serves comforting burgers, roasts and fish and chips. Equally comforting is the service – usually warm and welcoming. For even more warmth, there’s a terrace overlooking the river. 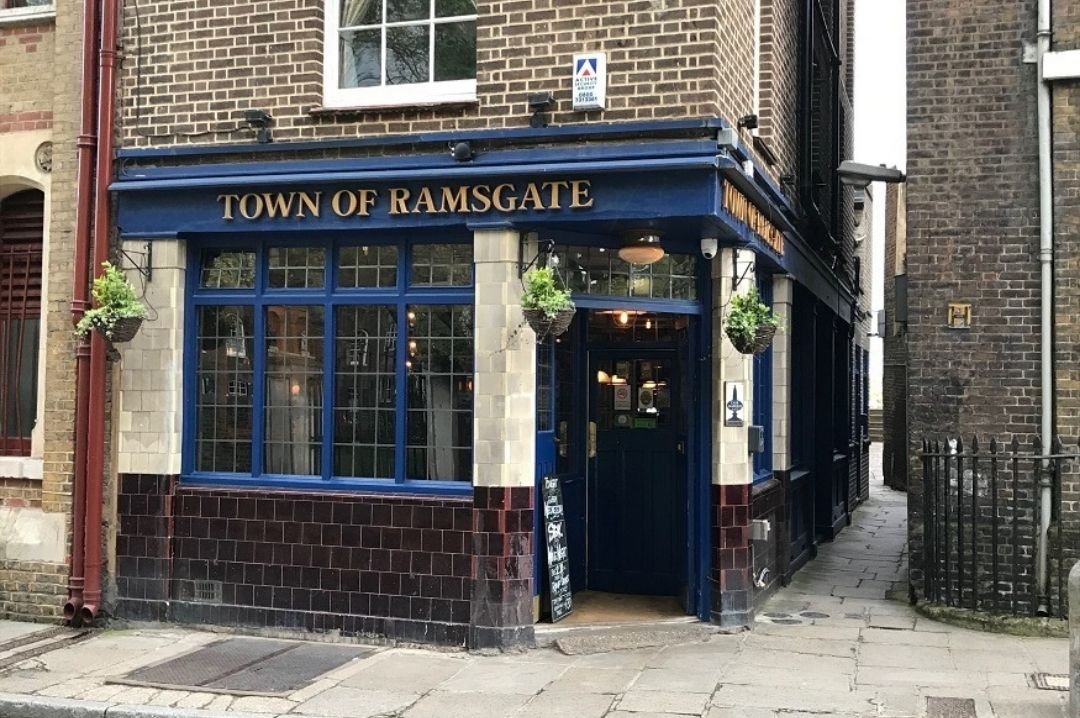 Of all the Thameside pubs, Mayflower is one the most special, the most atmospheric, the most tucked-away – and its wooden deck at the back has probably the best view of the river too. If there’s a better accompaniment to an evening pint than the sound of the river slapping away through the slats under your feet, and the lights of the City twinkling away in the distance.

The Prospect of Whitby is a historic public house on the banks of the Thames at Wapping in the London Borough of Tower Hamlets. It lays claim to being the site of the oldest riverside tavern, dating from around 1520. Wood paneling, dark corners, and uneven stone floors help to make it one of the city’s most atmospheric old drinking dens. Indeed, it seems hard to have changed since the days of dockworkers and deckhands. 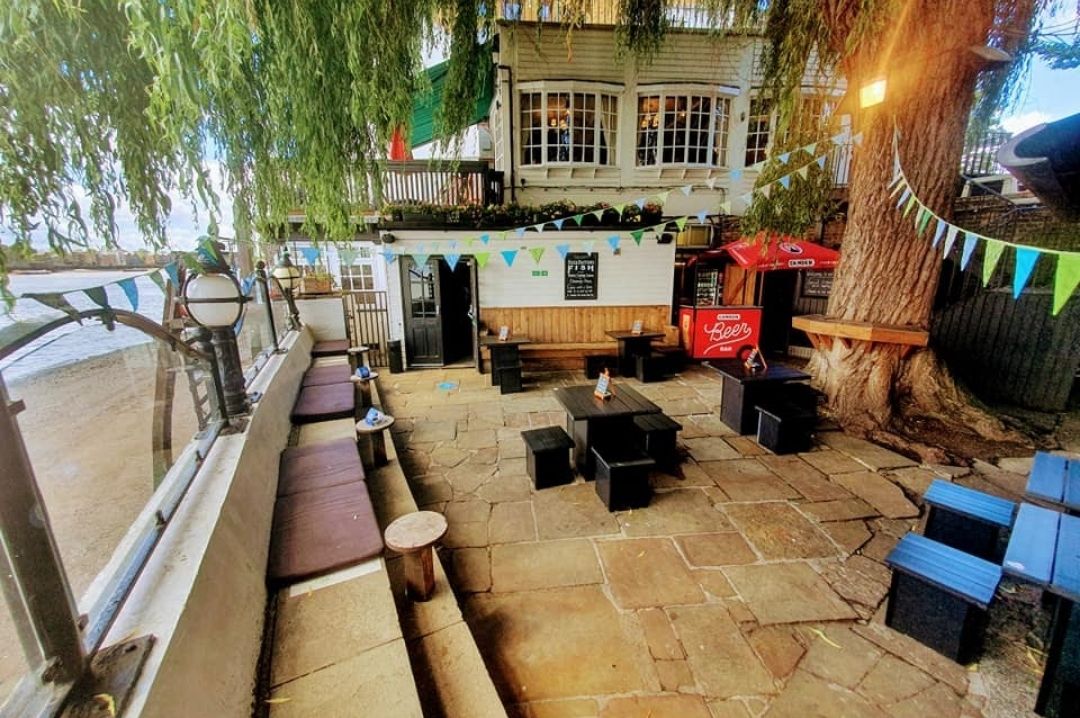